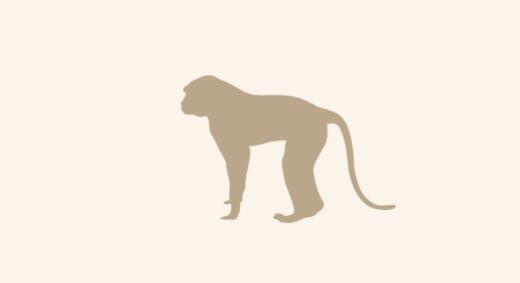 Chimpanzees live only in Africa and have over time narrowed their habitats in the African rainforest. The chimpanzee is a great ape, and is thus closely related to man. Chimpanzees manufacture and use their own tools. They do this, among other things, when they have to fish ants out of anthills. Here they break nuts with stones and use small sticks to get the ants out.

Facts about the chimpanzee

The chimpanzee is similar in body to the human body. The posture with a head, arms and legs and relatively long upper body, allows the chimpanzee to walk upright like the human. The chimpanzee’s body is covered with coarse black hair, with the exception of the face, fingers, palms, toes and soles of the feet. The very special thing about the chimpanzee compared to other monkeys is that it has very sensitive fingers and therefore it is very coordinated and motorized with its hands – just like humans are. This is partly due to the location of its thumbs. Its big toes are also developed like the thumb, making the chimpanzee motorically strong. Males are significantly larger than females – approx. 20 to 30% larger, which also makes them significantly stronger.

The chimpanzee is pregnant for approx. 7.5 months corresponding to 228 days. It also happens that chimpanzees give birth after 200 days, where there are still good chances for the baby to survive. The baby weighs about 2 kg at birth, and can, like humans, go after a year. The female usually gives birth to only one young at a time, but there are also cases where the chimpanzee gives birth to 2 young. The kids are very confident in relation to their mothers. Chimpanzees who lose their mother at an early age can die from stress as a result because they lack closeness, body contact and security from the mother.

The chimpanzee is a herd animal. They often live in large flocks that can vary greatly in size. It can be small flocks of 5-15 chimpanzees, but also flocks consisting of more than 100 chimpanzees. The most common is that there are between 35-60 chimpanzees together in a large area. The herd is divided into smaller male and female groups that move in the same area. Here they stay together in hierarchical groups of 5-15 males. The males live in a strong social structure where one or more males dominate the group. If several males dominate a group, it is most often because they are brothers. The females appear more as soloists in the group, and are therefore not so closely associated with the other chimpanzees in the herd. It’s only their kids they attach a bond to.

The behavior of the males in the hierarchical groups is almost given the character of being a gang with gang members. They successfully hunt larger mammals, antelope cubs and colubus monkeys. Furthermore, they patrol at their territories, and protect the borders. If the chimpanzee group is in the majority, they fight against other gangs, often with killing as a result. The flocks in which there are the most males therefore often have a better chance of spreading their territory. Some herds have even wiped out other neighboring communities. There is a great risk that young will fall victim to cannibalism, as the males see it as a form of hunting trophy to kill the young of other communities.

The chimpanzee is one of four great apes. Together with the bonobo monkey (dwarf chimpanzee), it is the monkey that is genetically most reminiscent of humans. As much as 98.2% of genes are comparable to humans. In addition to the chimpanzee and the bonobo monkey, the orangutan and gorilla are also perceived as great apes. Their genes match 97% with humans. That humans are descended from apes, however, is not entirely correct. Chimpanzees, bonobos, gorillas, humans and orangutans come from the same genus, which is why all the “monkey species” mentioned are related. Chimpanzees, like humans, use language to communicate with. It is partly sounds and facial expressions and partly touches, movements and poses.

Travelers’ questions about the chimpanzee

Is man a worse monkey?

Furthermore, the chimpanzee is one of the few animals that uses tools to survive. Here they use pointed sticks to catch termites from termite nests, heavy branches to strike with, broken hammer stones for tree roots or stones to crush nuts. Furthermore, the chimpanzee curls leaves and moss, and uses this as a kind of sponge to suck up water from hollow tree trunks. The use of tools is very individual from group to group, where the use of tools is a method that is inherited from chimpanzees to chimpanzees.

Is the chimpanzee an “imitator”?

Yes, that is the one.

It is actually the chimpanzee that has given its name to the term “to imitate”. It has it because it is really good at seeing and imitating the behavior of other monkeys and, for that matter, humans. Chimpanzees are not only good at imitating, they are also aware of whether other individuals are “imitating” them. If e.g. a human mimics a chimpanzee, the chimpanzee will make new movements that the human must mimic. It does so to test whether man will ape after. Of course, it is not always the monkey, which is why the “monkey” is governed by desire and curiosity.

Is the chimpanzee threatened?

Yes, that is the one.

While the number of people on earth is increasing year by year, it is going the opposite way for the chimpanzees. In just 100 years, the population of chimpanzees has decreased by 90%, which today makes the chimpanzee an endangered species. One of the chimpanzee’s biggest threats is the felling of Africa’s lush forests. Furthermore, poaching poses a threat to the chimpanzee, as its meat is highly sought after in parts of Africa. This is partly because there are so many poor people, which is why for them it is more a question of their own survival than an actual delicacy. The chimpanzee is also endangered as it is highly sought after as a pet. Despite the existence of legislation against the resale of endangered animals, it is a legislation that is difficult to enforce for the Central African territory.