Genetic code is the set of rules that determine the way in which the genetic information contained in the DNA is translated so that the RNA can convert it into the amino acids of a protein. 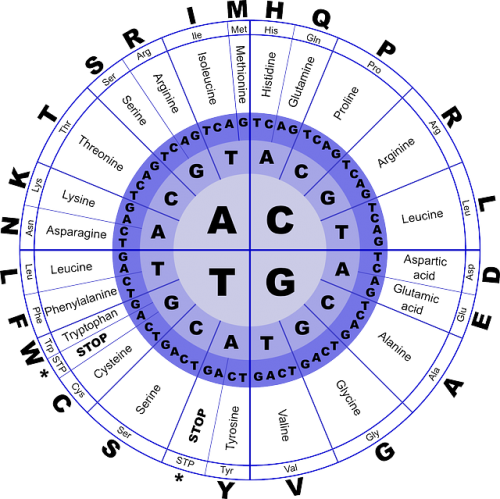 In the media the meaning of genetic code is often confused with that of genotype, genome and DNA, so they use it as a synonym.

However, it is necessary to keep in mind that the set of existing relationships between codons and amino acids and not the DNA or genotype itself is called the genetic code.

DNA and RNA are formed by nucleotides. In the DNA the nucleotides are adenine (A), guanine (G), thymine (T) and cytosine (C). In RNA, thymine is replaced by uracil (U).

The process of “reading” the genetic code is carried out in two steps, which are transcription and translation. The key to executing these processes is in the complementarity of nucleotides; that is, each nucleotide in a DNA chain is complemented with another, so adenine only pairs with thymine (AT) and guanine only pairs with cytosine (GC).

The transcript refers to the process whereby information DNA is transcribed into messenger RNA (mRNA). This is as if we were transcribing an old text to a digital version.

In translation, the nucleotide sequence in the mRNA is decoded into an amino acid sequence that ultimately forms a protein. In this case, it is as if we were translating a text in Spanish into Japanese, where the characters are different.

Characteristics of the genetic code

To facilitate its understanding, we must point out the main characteristics of the genetic code. Let’s see.