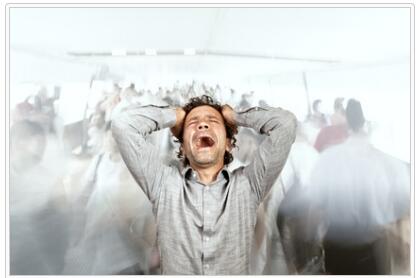 The medical professional understands agoraphobia to be a psychological disorder or phobia . The person concerned is afraid of not being able to escape from an everyday situation (for example in the S-Bahn or at the hairdresser’s). This fearful situation then usually leads to a panic attack .

Agoraphobia sufferers fear not being able to escape from an everyday situation (for example in the S-Bahn or at the hairdresser’s). This fearful situation then usually leads to a panic attack.

Every living being knows fear states. In the animal world and also with us humans, this feeling protects us when a threatening situation or danger approaches. Anxiety is usually a natural warning sign.

Affected people who suffer from agoraphobia transfer their anxiety states into normal life situations. However, they overestimate the danger of a situation and are therefore afraid to go to certain places with a crowd. Ultimately, this excessive feeling of fear can lead to the fact that they no longer leave their own apartment.

In many cases, a severe traumatic experience triggered the agoraphobia. However, the cause can also be very stressful life events that last for several weeks or months.

The death of a loved one, conflict in a partnership, the divorce from the spouse, bullying at work, work overload or a termination can trigger circumstances for agoraphobia.

In agoraphobia, anxiety states occur, which can extend to panic attacks . Those affected are afraid of large squares, confusing expanses or a crowd of people and a crowd. At first, the fear only becomes noticeable insidiously and begins with a strong feeling of discomfort in the situation in question.

Only over time do the fears manifest themselves more and more until the person affected can name them directly. Medical assistance should be sought at this point. If agoraphobia is not treated, it can lead to a significant reduction in quality of life and freedom of movement. Those affected try to help themselves and mostly resort to so-called avoidance strategies.

If fear mainly occurs in large squares, large squares are avoided or no longer crossed, but rather circumvented in a laborious manner. In most cases, however, there is no improvement, but rather a worsening of the situation. The circumstances that generate the fear expand, so that new additional avoidance strategies are necessary.

In the worst case, this can mean that those affected are even afraid of even leaving the apartment or house. In the long term it may be possible that they can no longer take part in public life.

Agoraphobia shows psychological and physical reactions in the person affected. Many fears determine his thinking, his feelings and his behavior. This manifests itself in the fact that he is constantly afraid that something bad could happen to him or that he could be alone and helpless or even in mortal danger.

Am I coming out of here alive? What if i have a heart attack ? I can’t do it alone! I can not take it anymore! What if I can’t breathe or pass out? – feelings of helplessness of this kind lead to high blood pressure and the muscles in the body tense up.

This leads to physical reactions, which in turn provoke fear again. Sweating , dry mouth, tremors , strong palpitations or rapid and irregular heartbeat, shortness of breath , nausea and vomiting , urination and defecation, dizziness, and lightheadedness are some of the possible physical symptoms of agoraphobia.

Because the person concerned is afraid of these physical reactions, he begins to avoid certain situations or places. He no longer goes to public places, department stores, supermarkets, inns or hotels, cinemas or theater events. He avoids using public transport or taking long-distance trips by plane or train.

Those who suffer from agoraphobia experience their symptoms in phases at first. However, he is becoming increasingly insecure and believes that he is actually affected by a serious organic disease. If agoraphobia remains untreated, the further psychological course is unfavorable.

Agoraphobia can severely limit life. If the anxiety disorder is severe, some of those affected no longer leave their home or only dare to go outside if they are accompanied by someone they trust. As a result, everyday tasks often become insurmountable obstacles. Work and family complications are almost inevitable in severe agoraphobia.

Friendships and other social contacts also often suffer from agoraphobia. This isolation in turn favors other psychological problems, such as obsessive-compulsive disorder or depression . A depressive episode can also occur despite treatment or only be triggered by treatment – when the person concerned realizes that they have been subject to a treatable disorder (often for many years).

Furthermore, in addition to agoraphobia, another anxiety disorder can occur. Specific phobias, generalized anxiety disorder, and social phobia come into consideration. Harmful use of drugs or alcohol may constitute a form of self-medication.

When should you go to the doctor?

A phobia like agoraphobia can potentially arise at any time in life. Most of the time, there have been latent fears of places where those affected feel defenseless for a long time. They avoid crowds in public places or travel to unknown places.

Agoraphobia often occurs as a result of unprocessed trauma or as a result of life crises. It is necessary to confidently go to the family doctor with such complaints so that the symptoms do not worsen. Increasing social withdrawal has far-reaching consequences. These can mean the loss of one’s job and the usual ability to act. Most of the time, those affected cannot free themselves from their fears on their own. Even going to the family doctor is often problematic. Shame can be added to fears.

The family doctor refers the person concerned to exposure or behavior therapy or another psychotherapeutic measure. He can also prescribe anti-anxiety medication that will restore a piece of normalcy to the patient. Since this can be a combination of anxiety disorders with or without panic attacks, further measures may be necessary. The anxiety disorder may already be generalized as it has often been around for a long time. However, the patient can experience through the therapy that fear can be forgotten again over time.

If the psychotherapist has ruled out other illnesses such as psychosis or organic illnesses and diagnosed agoraphobia, he uses examples from his own anamnesis to illustrate the connection between his fear and his avoidance behavior.

If the person concerned has become addicted to alcohol or medication in order to endure fearful situations, this must also be treated therapeutically.

There are practically two ways of treating agoraphobia therapeutically:

With systematic desensitization, the therapist tries to help the person affected step by step. First of all, individual coping strategies are developed in talk therapy . It can be helpful to learn a relaxation method, which is subsequently practiced in a supportive manner in the practical exposure exercises or desensitization therapy .

In addition, imagination therapy could prepare the person concerned individually. Furthermore, strong blockages could be resolved through hypnotherapy. The person concerned should then gradually face the concrete fearful situation together with his therapist until he has learned that it is unrealistic to have this fear or that he has learned how to deal positively with this fear in this situation.

The other way of treatment is called “flooding”. The person concerned dares to voluntarily face his most difficult fearful situation first, while the therapist remains observing in the background.

Many patients who suffer from more or less pronounced agoraphobia worry, in addition to their symptoms of anxiety, whether these unpleasant attacks will persist or disappear spontaneously or through appropriate therapy. In general, agoraphobia has a favorable prognosis, although it depends on two factors in particular.

On the one hand, the success of a treatment is often better if the patient goes to treatment as early as possible in more severe cases. By starting therapy quickly, a chronification of the clinical picture can often be avoided in advance. This means that undesirable side effects and complications such as the development of a strong fear of anticipation before the next attack of panic or strong avoidance behavior in relation to fear-inducing situations can often be avoided through early therapy.

On the other hand, the cooperation and motivation of the patient (so-called compliance) is also an important factor for the success of a therapy and thus the prognosis of the disease. In agoraphobia, it is especially important to expose yourself to fearful situations and to learn that these situations are harmless. In mild cases, a motivated patient can manage to carry out these exposures successfully on his own. In the case of stubborn cases, the responsible therapist will provide guidance, but who is also dependent on the participation of the person concerned for the treatment to be successful.

Agoraphobia is one of the anxiety disorders that generally require careful follow-up care, as it can easily flare up again. On the one hand, this can be done by the treating psychologist or psychotherapist, who offers regular sessions for stabilization. However, this can also be done independently, as the therapy sensitizes those affected to the thought patterns that trigger or promote agoraphobia.

Self-observation is an important part of follow-up care. If a patient notices that it is becoming increasingly difficult for him to be in crowds and in open spaces, it is important to consciously return to these situations. What has been learned from exposure therapy can be applied here in a targeted manner. The reminder that supposed dangers do not really exist in these situations is important for follow-up care and stabilizes health in relation to the anxiety disorder.

Self-help groups can also provide significant support for aftercare. The community of former and current anxiety patients supports in phases of weakness and the exchange of experiences expands the action strategies that are available when agoraphobia occurs.

You can do that yourself

Which self-help measures are appropriate in everyday life can vary greatly, as agoraphobia also varies from person to person. In the treatment of agoraphobia, confrontation plays an important role. Those affected can therefore repeatedly face small challenges in everyday life instead of avoiding fearful situations. In the beginning, it is often useful to be accompanied or instructed by a psychotherapist . The professional support ensures that the fear is not avoided, but that it actually subsides on its own. In addition, the therapeutic accompaniment can give a feeling of security.

In behavior therapy in particular , it is important that patients do their “homework”. The active participation in your own therapy enables you to make the best possible use of the therapeutic sessions. In addition, such homework can help implement what has been learned in therapy in everyday life.

For some people with agoraphobia, it helps if they better understand fear. Suitable literature can be found, for example, on the Internet and in books. However, the quality of such publications varies greatly. It is an advantage if authors have a scientific background or are therapists.

Agoraphobia can be associated with other mental disorders. These should not remain untreated, but should be included in the therapy as well as in everyday life.