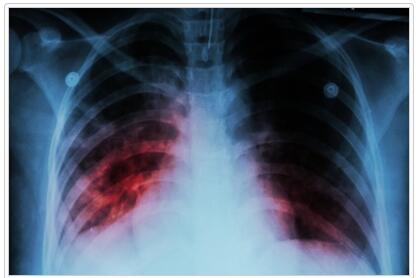 What is Acute Respiratory Failure?

A shock lung, or acute lung failure, describes the state of sudden shortness of breath. This is caused by damage to the lungs.

This so-called shock lung is caused by inflammation of the lung tissue, which can be caused by various factors. The consequences of not timely treatment can be: shock, unconsciousness up to organ failure and heart failure.

A shock lung, or acute lung failure, describes the state of sudden shortness of breath. This is caused by damage to the lungs. The patient gets very poor air, so that the carbon dioxide content in the blood increases steadily and the oxygen content decreases. The symptoms of acute lung failure can also include organ failure, shock, unconsciousness and heart failure .

As a rule, acute lung failure is always preceded by a previous illness that damages the lung tissue. However, these pre-existing illnesses can be of quite different nature: from pneumonia to injuries to poisoning .

The result is pulmonary edema , as the permeability of the blood vessels within the alveoli increases. This leads to a pressure drop in some vascular areas with a simultaneous increase in pressure in other parts of the lung tissue. In addition, proteins are released. As a result, the oxygen supply to the blood decreases sharply and the carbon dioxide content increases.

Acute respiratory failure is usually indicated by various warning signs. Due to the damage to the lung tissue, breathing is initially difficult. To counteract this, those affected increase their breathing rate, which ultimately leads to hyperventilating and hyperventilation .

As a result, acute shortness of breath occurs, usually combined with a panic attack , which manifests itself in dizziness , sweating and acute fear of death. At the same time, the affected person’s fingernails and lips turn blue. In the further course, depending on the phase of the lung failure, various symptoms can arise.

In the first phase, tissue damage occurs, which can be associated with an increase in breathing difficulties as well as bleeding and coughing . In the second phase, the original symptoms increase in intensity and the affected person usually passes out . In the third and last phase, a state of shock occurs, which can lead to organ failure or shock.

First aiders recognize acute lung failure when the person concerned has difficulty breathing or is already severely hyperventilating. An increased pulse and the characteristic rattle indicate acute lung failure, which must be treated immediately by an emergency doctor.

A shock lung usually begins with the following symptoms: Due to the damage to the lung tissue, the patient initially feels difficult breathing. To counter this, they begin to breathe faster, which leads to hyperventilating.

After a while, the affected person’s fingernails and lips may turn blue. In the further course, experts differentiate between three different phases: During the first phase, the tissue damage set in motion the biochemical process already listed under “Causes”.

In the second phase the symptoms intensify, so that in the third and last phase the patient only has the lung volume of an infant, because most of the lung tissue has stopped working due to the inflammation. Depending on how long the state of shock breathing lasts, the low oxygen content can lead to unconsciousness, shock, organ failure or heart failure.

Doctors then usually diagnose ARDS with regard to the previous illness. Ideally, the patient should be classified as at risk for shock lung before showing the first signs. The first signs are then when listening to the lungs in a rattle noise. An X-ray examination can provide a more precise diagnosis here, as it makes deposits in the alveoli clear, which can be an indication of the onset of shock lung disease.

Acute lung failure is a very dangerous condition for the human body and must therefore be treated immediately. Even if the lung failure occurs only briefly, an emergency doctor should be called or the hospital should be visited. In the worst case, lung failure can result in death, as the patient’s organs are not supplied with sufficient oxygen.

The longer the oxygen deficiency, the more the organs are damaged. The brain in particular is severely damaged, so that after lung failure, disabilities, balance disorders and speech disorders can occur. A few minutes after the acute respiratory failure, the patient’s extremities turn blue.

If the patient faints, he must be ventilated. This is done through mouth-to-mouth resuscitation until the emergency doctor arrives or the patient wakes up again. During this type of ventilation, the nose must be held shut so that the air cannot escape.

If the lung failure is not treated directly, death will occur in approximately 13 minutes. For this reason, rapid help and treatment from the emergency doctor is necessary. If the patient is still awake and hyperventilating, he should be reassured.

When should you go to the doctor?

If acute lung failure is suspected, an emergency doctor must be consulted immediately . Medical help is needed when symptoms such as hyperventilation or shortness of breath occur. In addition, an ambulance service should be called in if breathing is difficult for several minutes or if signs of hyperacidity are observed. Those affected by acute lung failure usually experience slight breathing problems at first, which eventually lead to hyperventilation and loss of consciousness.

Consult a doctor if one or more of these symptoms occur. Another warning sign is a blue coloration of the lips or fingernails, which usually occurs in the second phase of acute lung failure and requires immediate emergency medical treatment. Ideally, however, endangered patients should be classified as risk patients for shock lung even before the first warning signs.

A visit to the doctor is therefore recommended if rattling noises occur when breathing or general well-being deteriorates for no apparent reason. People with other pre-existing illnesses as well as smokers and other risk groups should see a doctor immediately with lung problems.

In order to treat acute lung failure in the best possible way, doctors resort to ventilation therapy as a first step. Because first of all, the most important thing is to stabilize the oxygen supply to the blood again, here we rely on technical support from ventilators.

Depending on how far the lung failure has progressed, an additional supply of oxygen via a ventilation mask is no longer sufficient and the patient must be intubated. Here a tube is pushed over his mouth or nose directly into his windpipe. A PEEP should be used at the same time.

This so-called “exhalation phase pressure” ensures that the alveoli are stretched when you exhale, thereby improving oxygen uptake. However, it is also essential to treat the cause that led to the damage to the lung tissue in advance. This is usually supplied with medication.

In the worst case scenario, acute lung failure can lead to patient death. As a rule, the patients suffer from severe shortness of breath , panic attacks or sweating . If there is no immediate treatment, the person affected can also lose consciousness and possibly injure themselves if they fall.

Also occurs hyperventilation on. In the further course there is also an insufficient supply of the internal organs with oxygen and blood, so that in the worst case they die or are irreversibly damaged. The brain is also damaged by the insufficient supply, so that later paralysis or mental limitations can occur. The further course of acute lung failure depends to a large extent on the cause and the treatment.

With the help of mouth-to-mouth resuscitation, the symptoms can be combated until an emergency doctor arrives. This can then carry out a causal treatment. The life expectancy of the patient may be significantly reduced by the acute lung failure. In the rest of everyday life, too, there can be considerable restrictions for the patient.

The surest way to prevent shock lung disease is to treat the underlying diseases that can lead to it intensively, even before they lead to a breathing disorder. If lung failure does occur, it should be recognized as early as possible in order to prevent serious consequences. It is important here that medical professionals think of the possibility of shock lung at the first signs of inexplicable shortness of breath.

Many patients with shock lung die from multiple organ failure as a result of a lack of oxygen supply. Only 50-60 percent of patients survive acute respiratory failure. These people should be given medical follow-up care. This deals with all after-effects of ventilation, as well as any pulmonary fibrosis that may develop after ventilation .

This can regress with medical treatment. However, this can take several months. Corresponding follow-up measures are essential during this time. However, pulmonary fibrosis can also cause permanent lung damage if it does not resolve.

Often the acute lung failure is described as “Acute Respiratory Distress Syndrome” or shock lung. With these symptoms, accompanying systemic inflammatory processes are often to be found. These are described as “Systemic Inflammatory Response Syndrome”. Depending on the severity of the breathing problems, more or less intensive aftercare measures are necessary.

The drama of lingering lung damage can lead to serious breathing problems for the rest of life. Without comprehensive care – if necessary with permanent ventilation obligation – the patient is helpless despite his survival. As a bed-ridden or wheelchair-dependent lung patient, he is more susceptible to thrombosis or embolism. He is also more at risk than others of developing respiratory infections or pneumonia after acute lung failure.

You can do that yourself

In the event of acute lung failure, an emergency doctor must be called immediately . Until the rescue service arrives, first aid measures must be initiated. First of all, the person concerned should be immobilized or left in a position that they find comfortable. If the affected person passes out, their pulse and breathing must be checked regularly in order to detect cardiac arrest at an early stage.

If cardiac arrest occurs, immediate resuscitation measures must be initiated. Suitable measures include chest compressions or mouth-to-mouth resuscitation. Resuscitation should continue until the circulatory system resumes or the ambulance arrives.

If an impending lung failure is suspected, the emergency services should also be contacted. Typical warning signs include difficulty breathing, chest pain, a fast pulse, and restlessness.

Sometimes there is also a bloody cough and a feeling of dizziness. If one or more of these symptoms occur, a doctor should be consulted. Patients with a pre-existing medical condition should discuss suspicious symptoms with their doctor. In the case of acute lung failure, home remedies and self-measures that go beyond first aid are to be avoided in any case.